While giving my wife a lie on on Saturday mornings, one of the things I’ve loved doing for the last couple of years with my now 7 year old daughter is watching my favourite TV show Star Trek The Next Generation.  Some people may say Star Trek is not for children, and there are some unsuitable episodes/moments, but I would argue there are many life lessons to be learned through the medium of Star Trek, while opening their minds to science.

I think The Next Generation is the best series to introduce your kids to the Star Trek Universe. It’s bright and colourful, has plenty of relatively straightforward concepts such as diversity, equality and fairness, and Starfleet’s finest provide several great role models in multiple careers (there should be a better balance among the sexes but let’s hope Star Trek 2017 attends to that).

If you’re thinking of showing your kids Star Trek, hopefully this guide will be of use to you. (Update: I did intend this to be a regular instalment, so maybe I’ll get back to it! I will go through each episode that I have watched with my daughter with a brief description, and potential lessons to be learned, including ratings and comments from our young reviewer Róisín!  Be prepared to pause some episodes now and again to help explain to your child what is going on, especially when it’s techno-babble heavy!  First up is season 4 episode ‘Data’s Day’. 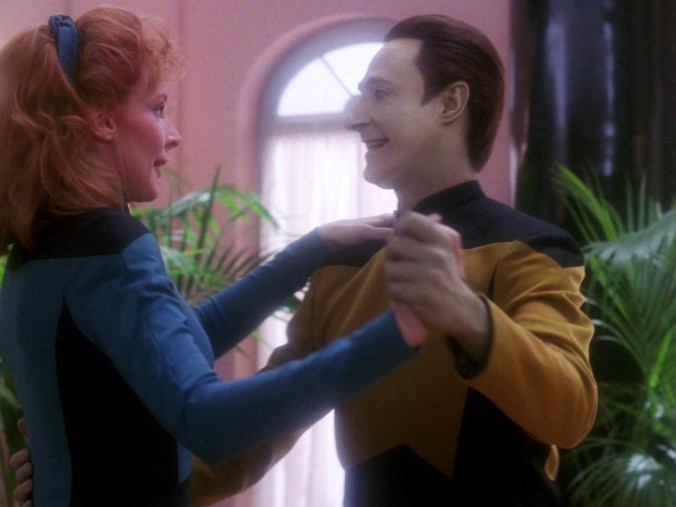 Róisín’s brief quote when I asked her about the episode: ‘I liked when Dr. Crusher asked to keep this between them because she didn’t want to be called the dancing doctor again.’

We’ve watched this episode a few times. It’s a light hearted episode which shows, from Data’s viewpoint, the sort of normal things that happen on the Enterprise.  It’s a nice introduction to a few characters in pleasant scenes  – Keiko gets married to O’Brien, we see Geordi going to the barbers, Worf using the replicator to pick out a gift, Data looking after his cat Spot, a great scene where Dr. Crusher teaches Data how to dance, Dr. Crusher tending to a pregnant lady etc.

There is an optional ‘B’ story (that I used to skip through when Róisín was younger, timestamps below) where Vulcan Ambassador T’Pel is due to negotiate a treaty with the Romulans. To get her aboard the Warbird the Romulans fake her death (it’s via a transporter incident so there’s no violence shown, but her remains are on the transporter pad) as she is really a Romulan spy. A possible lesson to be learned here is that people aren’t always who or what they say they are.

Timestamps for Data’s Day B Story are:

Notes: At 26:54 Data says the line, ‘There may be a correlation between humour and sex’, but to get out of a hole if required, the word ‘sex’ I suppose could be described here as male/female.