Five television series, each with their own crews, spanning seven hundred and twenty six episodes and twelve movies (About six good ones), and countless fan-made stories from 1966 and still going strong, Star Trek can be daunting to get into. It came back into focus in 2009 when JJ Abrams released his reboot movie, Star Trek. The movie helped create a new generation of Trekkies, but the sheer enormity of the Universe and source material makes it difficult to take in exactly what the Star Trek Universe is all about. I will be giving a crash course in the most important parts of Star Trek, starting with the most fundamental aspects and working towards the base details. 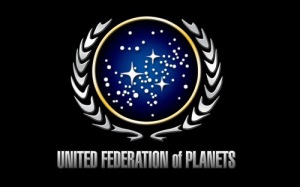 At a very basic level, The Federation is the Space United Nations. It is an alliance of planets, sharing personnel and knowledge, with the primary goal to seek out new cultures and map the Galaxy. The Federation has several different aspects to it, including a military presence, though it has always maintained its primary mission is one of peace. There are dozens of species, and hundreds, if not thousands, of planets, in the Federation. Each planet has its own contribution to the group, whether with ships, technology or resources. Those who do not wish to join, or are not yet warp capable, are left alone. this is the most important rule in the entirety of The Federation: the Prime Directive.

The Federation is usually portrayed in a positive light, showing the potential Humanity has for ultimate good in the Future. There are very few, if any, internal struggles among humans, there is no economy as money has been eliminated, and gender equality is certainly all sorted by the 24th century. The Federation is not above forming treaties with other species without assimilating them into the larger group. The Federation has non aggression pacts with the Klingons and the Romulans, a result of wars with both their species, and has even allied with them before, most notably in the war with the Dominion.

Starfleet is the military and exploration division of the Federation. It consists of multiple fleets of Starships deployed throughout Federation controlled, or unexplored areas of Space near the Federation border. The primary mission of all ships in Starfleet is to seek out new life and new civilisations, though all their ships are also equipped to defend themselves. Starfleet was founded in 2161 with the Federation by four races; Humans, Vulcans, Tellarites and Andorians. Its purpose was to provide protection against aggressive species such as the Klingons.

The military might of Starfleet has been tested several times, to a point where, within the space of just six months, they were challenged by the Borg, the Dominion and the Klingons. These battles, and especially the war with The Dominion (Which I will touch on in a later article) led Starfleet to rapidly develop more advanced weaponry and defences for their ships.

The Federation are, simply put, the “Good Guys”. They’re the ones you are supposed to root for and the ones you’re supposed to aspire to be. Even more than that, they are what humanity could be should we find ourselves not to be alone in the Universe. A galactic Governing body which humans have a great hand in running, and are responsible for helping create. I leave you with the famous monologue which lives on in the hearts of Trekkies everywhere.